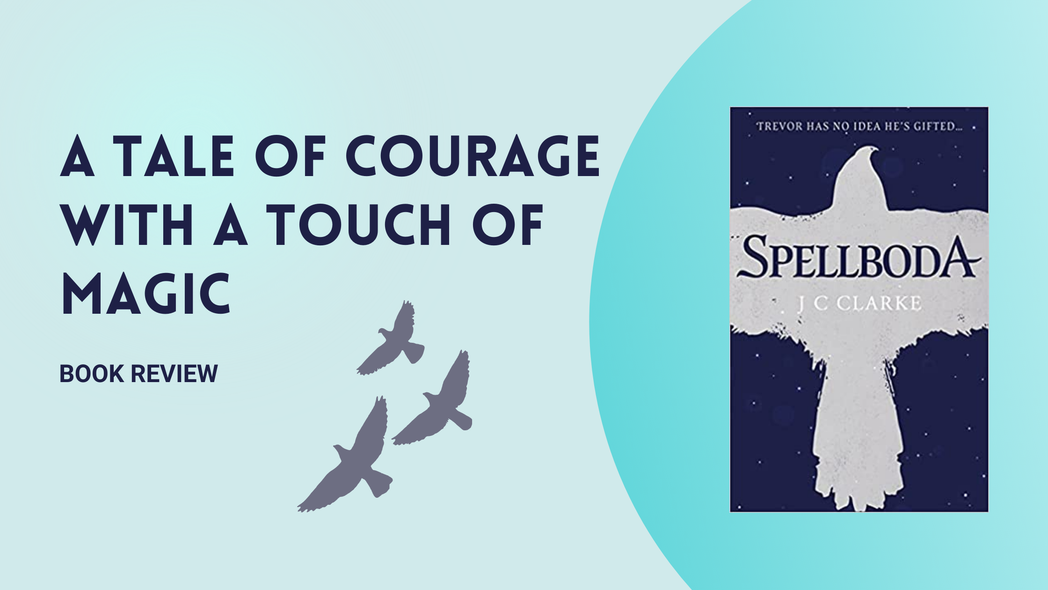 Spellboda by J.C. Clarke, is the wonderful story of Trevor and his bond with a bold and at times cheeky peregrine falcon called Midge. It's a tale of hope and determination to fight for what's right. The book had me instantly hooked, mainly due to the central character's unique voice and the brilliant premise.

Trevor's home life is in pieces. Since his mum's death, he's lost the desire to speak to anyone and he lives alone with his dad, whom he's grown to hate due to the constant shouting.  The situation has become so bad that he can barely refer to him as 'dad', opting instead for just his surname, 'Sykes'. Sykes seems to stand in Trev's way at every step - particularly when it comes to the one thing that gives him pleasure, which is helping at the local 'Flights of Fancy Conservation Centre'. This is where he meets Midge and finds out about the awful incident involving the smuggling of several protected birds.

When Trev's Dad refuses to drive him to his volunteering, he asks the headmaster to borrow a bike in lost property. His determination is rewarded, because he confirms his suspicion that he has a special superpower which he was never aware of. He is soon sucked into a fantastic adventure, which will be fraught with danger, but will teach him more about himself than he could ever imagine.

Writer J C Clarke was previously a falconer herself, which has meant that the book is permeated with amazing facts about birds and their behaviour. Even the introduction itself is a beautiful insight into what it might be like to be a peregrine falcon:

She flew over the crag-ridden landscape, hugging the contours of the Derbyshire peaks and valleys, in search of a thermal, the warm current that would suddenly propel her on high. Revelling in swift and unpredictable win currents, she jinked this way and that, adjusting deck and primary feathers, as she streaked through the Dale of Goyt, over the ruins of Errwood, skimming age-old crags and waterfalls swelled with recent rainfall, which sang to her as she passed.

Touching on themes of family, grief, friendship and nature, this is a book that will keep upper middle grade readers gripped until the very end!